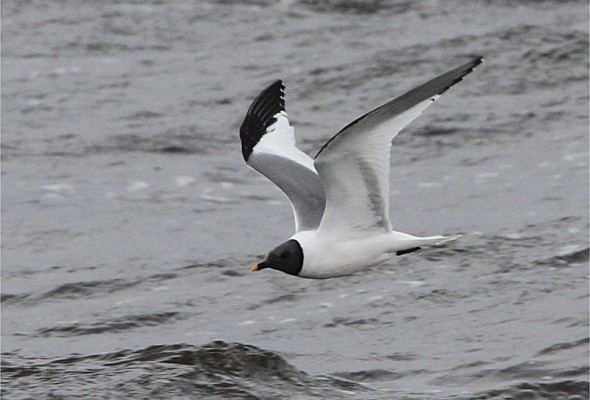 One Buff-breasted Sandpiper was at Cloghaun Lough, Loop Head this morning (John N Murphy & Finbarr MacGabhann). The other five birds were still at the Fodry, Loop Head while on the sea off the Fodry was one first-summer Sabine’s Gull, two Arctic Skuas, two Red-throated Divers and four Common Scoter.
Off the Bridges of Ross today there were 15 Sabine’s Gulls (6 adults, 8 2nd cal-years & 1 juv.),33 Sooty Shearwaters, 24 Storm Petrel, five Great Skua (Bonxie), one pale phase Pomarine Skua, 22 Arctic Skuas, two Sandwich Terns, 214 Arctic Terns, five Puffins, ten Common Scoters, three Red-breasted Mergansers and three Whimbrels. there were also ten Common Dolphin and one Sunfish.
Three adult Sabine’s Gulls, three Curlew Sandpipers, one Brent Goose and one Arctic Skua were at Doughmore Beach.
Two Arctic Skuas were at Kilkee.
Two Ruff were at Lough Atedaun.
Four Crossbills were at Gortcoirce, Dysert.
A Curlew Sandpiper, a Peregrine, 3 Gadwall, 2 Little Egret, 40 Shoveler and a small flock of 36 Black-tailed Godwit were at the Shannon Airport Lagoon and nearby mudflats this morning.