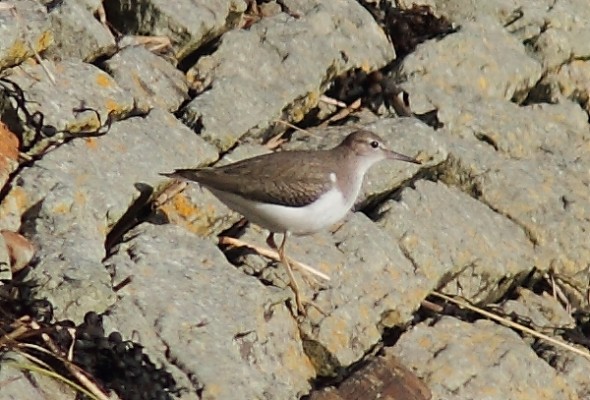 Two juvenile Spotted Sandpipers was at the railway bridge in Moyasta, Poulnasherry late this afternoon (Tom Tarpey, Tony Mee, Gerry Butler, John N Murphy, Finbarr MacGabhann et al).
These are only a fourth and fifth records of Spotted Sandpiper for Clare.
A juvenile American Golden Plover was at Loop Head (John N Murphy, Finbarr MacGabhann, Jeff Copner & Neal Warnock).
A Buff-breasted Sandpiper was at the Horse Field near the Bridges of Ross (Finbarr MacGabhann & John N Murphy).
One Snow Bunting was at the gates of the Lighthouse at Loop Head while on the rest of the headland there wqs on male Hen Harrier, three Merlin 110 Golden Plover, eight Chough and one Baarnacle Goose.
At the Bridges of Ross there were 11 Sooty Shearwaters, one Leach’s Petrel, two Bonxies, two Pomarine Skuas, one Grey Phalarope, two Common Scoters and one Manx Shearwater.