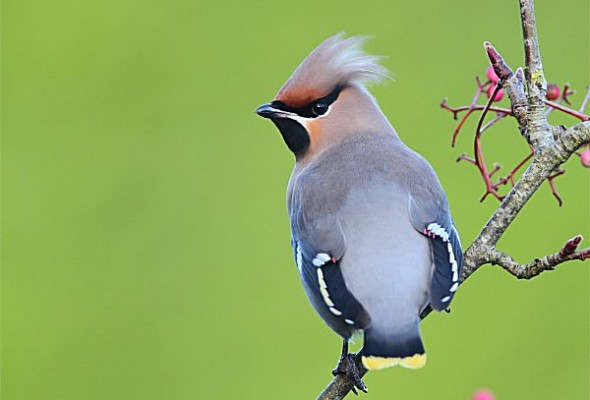 One of the 35 Waxwings on the Tulla Road © John N Murphy
To see more photographs of these birds go to www.murfswildlife.blogspot.com

The young drake Lesser Scaup was still at Lough Gash (John N Murphy), along with one drake Greater Scaup, ten Gadwall and 160 Tufted Ducks.
A flock of 35 Waxwings were on the Tulla Road in Ennis this afternoon.
Another four Waxwings were near O’Keeffe’s Oil Depot near the Watery Road in the late afternoon.
One individual Waxwing was at the New Road Roundabout earlier in the morning.
Ten Whooper Swans were at Ballycar Lough this morning.
There were 30 Whooper Swans at Scarriff Bay just outside Mount Shannon this morning.