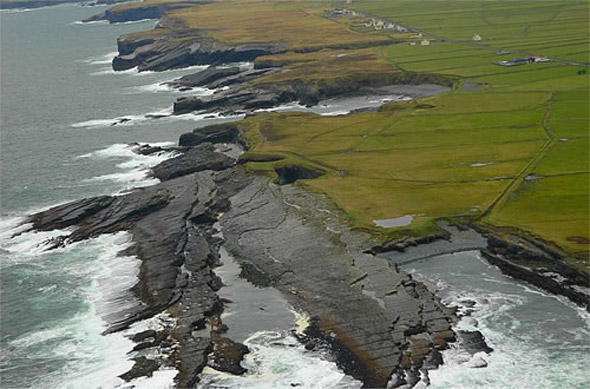 The Bridges of Ross is located on the north side of the Loop Head peninsula. It is low lying and seabirds pass very close to shore during autumn migration. When sitting at the sea-watching point one faces northwards, so the light and sun is always at your back.  Seabirds normally pass very close to shore if not over your head.  This makes for really exciting watching and allows the observer superb views of all passing seabirds.

During late summer and early autumn Great, Cory’s, Balearic, Sooty and Manx Shearwater passage can be excellent.  All four skuas, Great, Arctic, Pomarine and Long-tailed are regular and occur from late July to early November.  Storm Petrels can be seen from mid July to late October.  Wilson’s Storm Petrels are seen normally from mid July to mid September with mid August being the best time of year for passage.  Leach’s Petrels are always that bit later and occur in large numbers from late September to late October. Sabine’s Gulls also appear from mid August to late October.  Grey Phalarope are regular in September and October.  Little Auks put in an appearance from early October to late winter depending on wind direction. Other wildlife: regularly seen off the Bridges are Whales, Dolphins and sunfish.

In autumn the best sea watching conditions are often after northwesterly gales, especially if the storm centre lies well to the north between Scotland and Iceland or if a fast depression moves down from Greenland and arctic Canada across the north Atlantic. These systems blow in Sabine’s Gulls, Leach’s Petrels, Little auks, and Grey phalaropes along with a good selection of skuas. Of the rarer seabirds so far there has been ten Fae’s Petrels, two Swinhoe’s Petrel, one Sooty Tern and three Little Shearwaters.