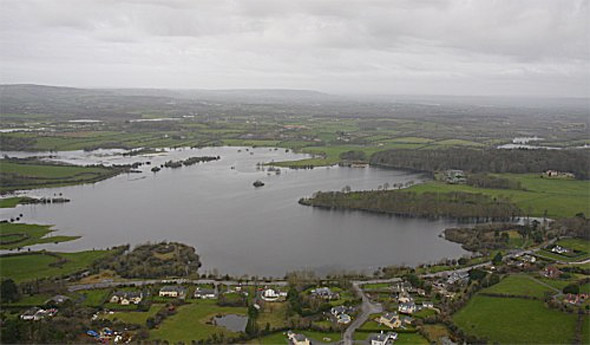 Ballyallia Lake is three miles north of Ennis just off the main Galway road. In winter it is very good for wildfowl especially ducks and hosts many other species of waders on its wet meadowed shores.The lake holds breeding Great Crested and Little Grebes. Coot and Moorhen are also plentiful. Winter Birds include a feeding flock of approximately 40 Whooper Swans which feed mainly on grassy fields at the Drumcliff graveyard end of the lake.
Ducks commonly found on the lake are, Mallard, Teal, Wigeon, Tufted, Pochard, Pintail and Shoveler in National numbers of importance.
Waders seen in winter include Lapwing, Curlew, Redshank, Black-tailed Godwit, Dunlin and Snipe.
Passerines found around the shores and tree lined areas include Jay, Raven, Kestrel, Hen Harrier, Peregrine, Blackcap, Grey Wagtail and Brambling.  A Lesser Whitethroat was found over-wintering in the 1970’s.