Clare Bird Report 2006
Compiled by John Rattigan on behalf of the Clare branch of BirdWatch Ireland. 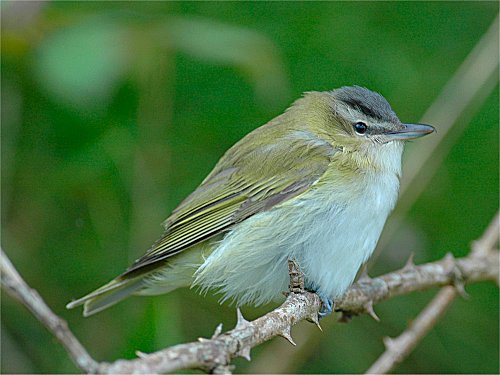 Introduction
This report is based on records submitted to www.clarebirdwatching.com during 2006, only the second full year of coverage  since the site went live in 2005. Records were submitted for a total of 285 days during the year, up on 184 days in 2005. Coupled with the increased coverage, greater effort was made to record localised resident species, hopefully presenting a more complete picture of their status within the county and presenting base data from which population changes can be measured in the future.

Other sources consulted include the Galway Birding website, Birding World and the Clare Cuckoo Survey.
Summary
There were three new species added to the county list during the year: a Little Ringed Plover was found at Lough Donnell in September and a Canada Warbler – new to Ireland and only the second western palearctic record – spent several days at Kilbaha during October. The third new addition concerns the 1994 record of a Black Kite at Shannon Airport Lagoon, recently accepted by the Irish Rare Birds Committee. Consequently, the county list currently stands at 305 species.
Other major rarities recorded during the year included Spotted Sandpiper and Purple Heron (both second records), Lesser Yellowlegs and Wilson’s Phalarope (both third), Red-eyed Vireo (fourth), White-rumped Sandpiper and Common Rosefinch (both fifth), American Golden Plover and Long-billed Dowitcher (both ninth).
Along the coast, Black-throated Diver numbers were up on the previous year at their traditional haunts along the north coast of the county and two Red-necked Grebes were found during the year in the same locality. Off the west coast, four Fea’s Petrels, one Little Shearwater and two Wilson’s Petrel’s were reported from the Bridges of Ross during the main seawatching period in the early autumn. A Canada Goose was also found between this seawatching site and Ross Bay – the first record for a number of years, while Green-winged Teal were found at Bell Harbour and Querrin and Garganey at Shannon Airport Lagoon. In recent years Ring-necked Ducks have become a regular feature in the county, and this year was no exception with several at Ballyallia, Inchiquin and Knockalough lakes.
Raptors of note included a Buzzard reported from two different locations in the county in April and the second half of the year saw several Marsh Harrier reports. However, the outstanding raptor of 2006 was an occasionally accommodating Osprey that lingered at Lahinch during the autumn.
A number of memorable Neararctic waders also feature in the report with the aforementioned Spotted Sandpiper, Lesser Yellowlegs and Long-billed Dowitcher all appearing for the second year in succession. Up to nine Pectoral Sandpipers were recorded at four localities, including one carrying a Brazilian colour ring. The westerly storms which lashed the county in November and December brought Grey Phalaropes to the shoreline at Liscannor, Quilty and Kilkee with many of them staying into 2007.
There was the usual smattering of Mediterranean, Ring-billed, Iceland and Glaucous Gulls from around the coast. Although Sabine’s Gull numbers were down at the Bridges of Ross, an adult that stayed in the Shannon area for almost a week in August at times gave great views, while several Little Gulls were found sheltering along the coast during the bad weather in December.
For many, however, the highlight of the birding year was the Canada Warbler. This tiny transatlantic vagrant, accompanied by a Red-eyed Vireo, sparked an unprecedented international twitch that resulted in coverage in the national broadcast and print media. It was these visiting twitchers who reported the Red-breasted Flycatcher and a Common Rosefinch in the locality; while later in the autumn, two Yellow-browed warblers were also located in Kilbaha.
While good numbers of Blackcaps were recorded throughout the year, there is anecdotal evidence that Willow Warblers and Tits occurred in lower numbers. There were only two records of Tree Sparrow and it is unclear as to whether this was due to their ongoing decline or under recording. Perhaps increased vigilance and submission of records could illuminate the status of this species; an improvement in Yellowhammer reports by local observers during 2006 is reflected in this report.
Thanks to everyone who sent in their sightings during the year, we appreciate your time and efforts.
The Systematic List
The sequence followed is that of Professor K.H. Voous’ "List of recent Holarctic Bird Species" (1977). Some records within this report may not have yet been accepted by the Irish Rare Birds Committee (I.R.B.C.). For rare species with bracketed numbers e.g. Canada Warbler (1,1), the first number stands for record of occurrences within the county Clare to date and the second one for number of occurrences within the year covered by this publication, 2005. 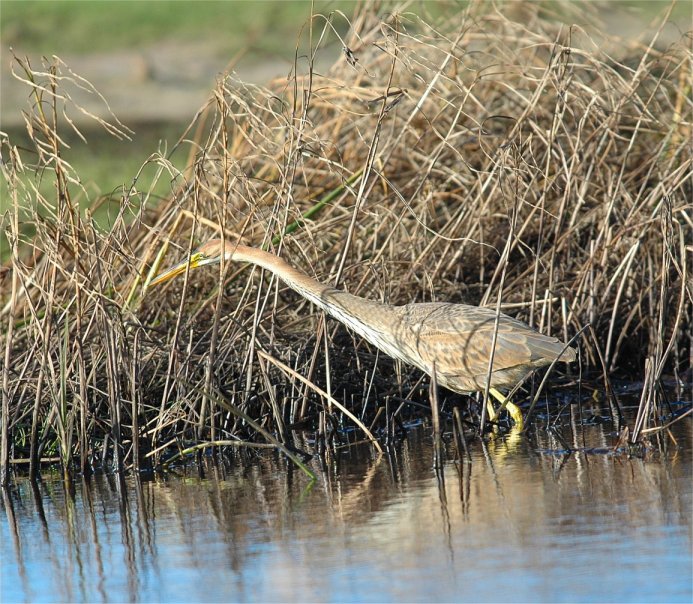 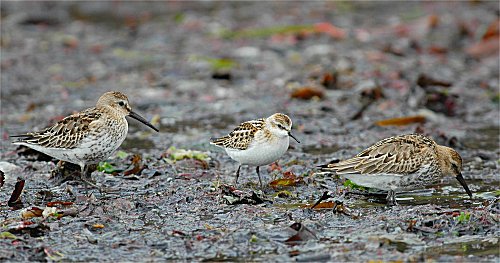 Little Stint with Dunlin John N Murphy
Green Sandpiper Tringa ochropus
Scarce passage migrant, occasionally winters.
Ballynacally: two at Ballycorick Bridge on 4th October; three there on 9th and 10th October.
Clarecastle: on was present at the quay on 29th January.
Doonbeg: one on 5th – 6th September; one on 9th November.
Ennistymon: one at the falls on 14th – 17th October; one there on 25th December.
Moyasta: two on 19th August; one on 25th August; two on 19th September; one on 11th October.
Newmarket-on-Fergus: one on the Rine River at Dromoland on 24th December.
Common Sandpiper Tringa hypoleucos
Scarce breeder and regular passage migrant.
Bunratty: one was seen on the Owengarney River on 22nd January.
Burren: one near Mullaghmore on 15th May.
Clarecastle: one at the quay on several dates between, 4th – 29th January; two present on 30th January; one on 8th March; two on 22nd March; one 4th April; two at Islandavanna on 8th August; one at the quay on 15th August; two on the pier on 11th October.
Doonbeg: one on 7th September; one on 9th September; one on 2nd October.
East Clare: two pairs were at Lough Graney on 25th May.
Ennis: two, Ballyallia Lake on 6th July.
Loop Head: one at Kilbaha 13th August.
Lough Bunny: two on 27th June and again on 30th June.
O’Brien’s Bridge: two on 25th December.
Quilty: one at Lough Donnell on 9th September.
Redshank Tringa totanus
Common winter visitor.
Shannon: 30 at the Airport Lagoon on 3rd July; 500 on 6th September.
Spotted Redshank Tringa erythropus
Regular passage migrant.
Liscannor: two on 17th December.
Shannon: one adult summer was at the Airport Lagoon on 3rd – 4th July; two on 6th September; one on 16th September.
Greenshank Tringa nebularia
Common winter visitor and passage migrant.
A high count was ten at Doonbeg on 5th September, increasing to 22 there on 7th September.

Scarce passage migrant.
Bridges of Ross: one on 25th August; 12 on 6th October; three on 6th December.
Kilkee: two on 30th December.
Liscannor: two were seen in the bay on 12th December; one off the pier on 13th December.
Quilty: one on 2nd December.
Wilson’s Phalarope Phalaropus tricolor (2,1)
Rare vagrant.
Loop Head: one stayed just long enough to be photographed in a flooded field at Ross Bay on 23rd September (John N Murphy). This is the third county record and the first away from Shannon Airport Lagoon where it was recorded in August 1981 and August 1984. 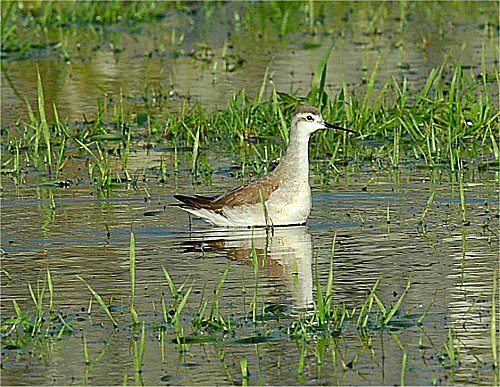