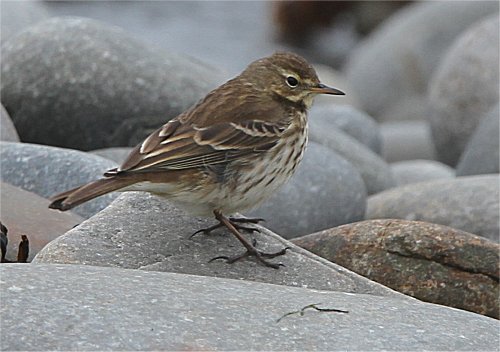 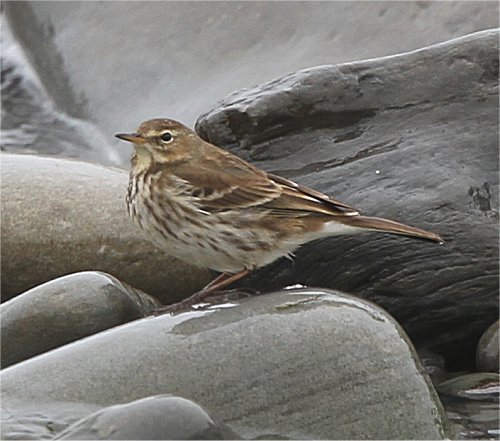 Water Pipit at Clahane © John N Murphy
Sunday 30th January 2011
The Green-winged Teal was at Bell Harbour this morning (James Hayes & Clodagh Glasgow).
There were two Black-throated Divers, eight Long-tailed Ducks, one Red-throated Diver and a Peregrine at the Flaggy Shore.
A flock of 49 Whooper Swans were at Kilkee reservoir.
Saturday 29th January 2011
The Water Pipit was at Clahane (Dave McNamara).
The first-year drake Ring-necked Duck was at Lough Gash (John Power & Denis O Sullivan).
One first year male Eider was off the Flaggy Shore near Lough Murree along wth six Long-tailed Ducks.
At Lough Murree there were 150 Brent Geese, two of whom were colour banded while the Black Swan was on the lake.
Two female Goosanders, initially seen on the Limerick side of the Shannon at Corbally, were last seen at St Thomas’s Island, Parteen.
Water Pipit at Clahane © Dave McNamara
Redshank at Clahane with colour rings a returning bird © Dave McNamara
Friday 28th January 2011
The Water Pipit was back at Clahane (Dave McNamara).
The drake Green-winged Teal was at Bell Harbour (Howard Williams).
Four Black-throated Divers, 19 Long-tailed Duck and a Merlin were at Finvarra Point.
There were 145 Barnacle Geese at Killard, Doonbeg.
Three Tree Sparrows  were near Doonbeg Golf Club.
One adult Mediterranean Gull and a Peregrine were at Doughmore Bay.
At Ballyallia Lake the three White-fronted Geese were with the Greylags and one Water Rail was showing well near the slipway.
One Little Egret was a the Killow West attenuation Pond.
A flock of 110 Whooper Swans were at Ballygireen.
A male Blackcap was on the banks of the Fergus at New Road Ennis. 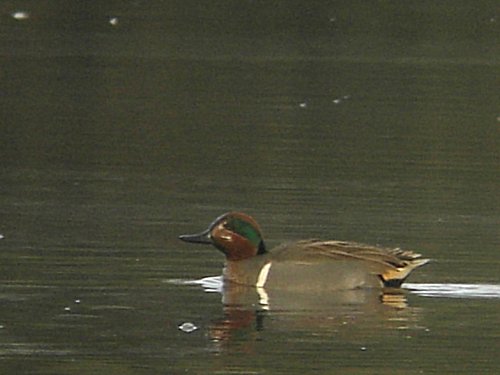 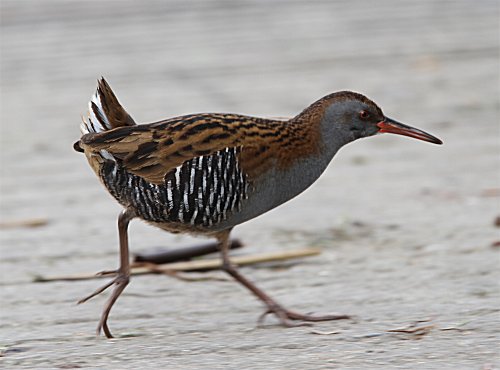 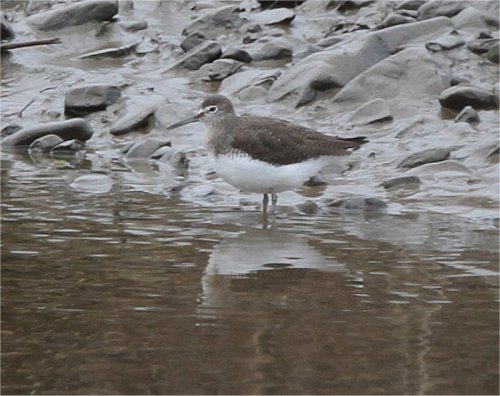 Green Sandpiper at Ballycorrick © John N Murphy
Sunday 23rd January 2011
One Water Pipit was at Clahane this lunchtime (Dave McNamara).
One Kingfisher was seen on the Fergus River at Willow Park, Ennis. 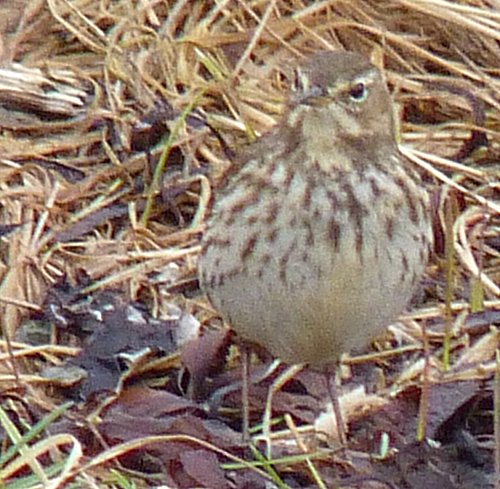 Water Pipit at Clahane © Dave McNamara
Saturday 22nd January 2011
A PACIFIC DIVER was off the Martelloe Tower at Finvarra Point today (Tim Griffin).
Also off the North Clare coast were 24 Black-throated Divers and one Whimbrel.
There was one Water Rail, 100 Tufted Duck, 24 Greylag Geese and 38 Black-tailed Godwits at Ballyallia Lake. One of the Black-tailed Godwits was colour ringed.
Friday 21st January 2011
There were 32 White-fronted Geese at Tullagher Bog.
One Peregrine and eight Purple Sandpipers were at Kilkee Beach. 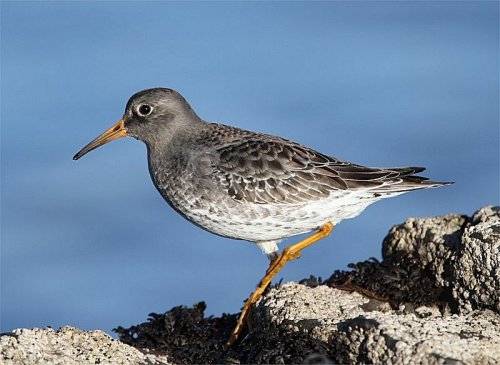 Purple Sandpiper at Kilkee © John N Murphy
Thursday 20th January 2011
One Short-eared Owl was at Deelin Moor, the Burren.
A female Blackcap was at Oak Park Ennis and a male on the banks of the Fergus at New Road, Ennis.
One male Hen Harrier was near Miltown Malbay.
One female Hen Harrier was at Querrin.
Wednesday 19th January 2011
There were 100 Golden Plover and six Great Northern Divers at Doonbeg.
Redpoll at Doughmore © Jeff Copner
Tuesday 18th January 2011
The first-winter drake Ring-necked Duck was at Lough Gash (John N Murphy & James Hayes.)
One Waxwing flew over Kilbaha, while two tree Sparrows were in the gardens and a Peregrine was seen hunting the headland.
One Lapland Bunting was heard calling near Ross Bay.
Three White-fronted Geese, over 200 Tufted Ducks and a Water Rail were at Ballyallia Lake.
One Little Egret and a Water Rail were at Shannon Airport Lagoon.
One Common Sandpiper and four Turnstone were at the Quay in Clarecastle.
Monday 17th January 2011
There were seven Waxwings on the Gort Road, Ennis this morning.
One Lapland Bunting was at Loop Head, along with a 2nd/3rd winter Glaucous Gull and one Merlin.
Some seabirds were observed on the cliffs, 1900 Guillemots and 140 Fulmars.
One Brambling was seen near Ballycar, Newmarket-on-Fergus.
Six Chough were at Clahane and 15 Red-throated Divers were on Liscannor Bay. 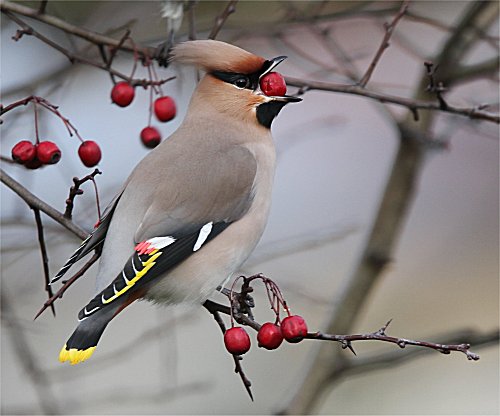 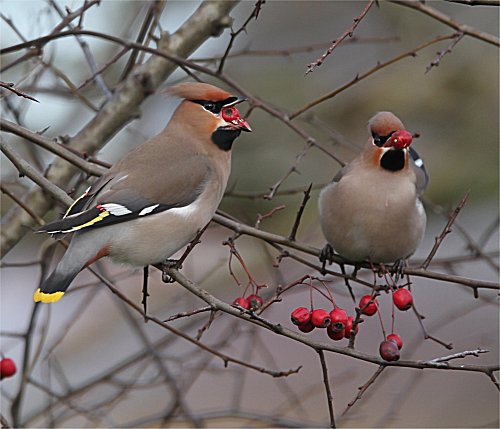 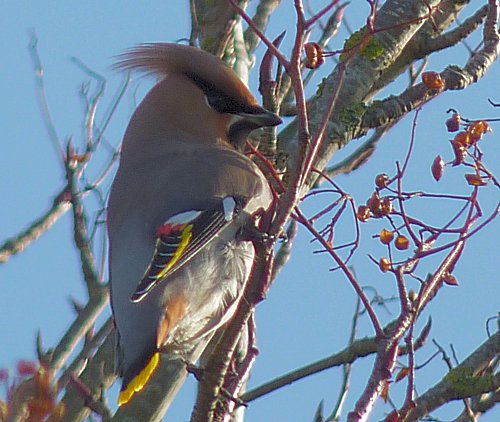 Waxwing in Ennis © Dave McNamara
Sunday 16th January 2011
One Black-thoated Diver near Doorus on the north coast.
One Brambling was within a flock of 200 Chaffinches at the Shannon Industrial Estate.
One Merlin, one Little Egret, three Sandwich Terns, 20 Great Northern Divers and 80 Ringed Plovers were at Aughinish Island.
A flock of 38 Greylag Geese were at Fenloe Lake.
Saturday 15th January 2011
The first-winter Ring-necked Duck was still at Lough Gash this morning (John N Murphy & Finbarr MacGabhann).
The drake Green-winged Teal was still at Bell Harbour (Clodagh Glasgow & James Hayes).
One Short-eared Owl and a female ring tailed Hen Harrier were at Lough Muchanagh.
Eight Barnacle Geese were near the White Strand, Doonbeg.
A small flock of 30 Purple Sandpipers were at Seafield, Quilty along with 120 Turnstones, 40 Sanderling and 50 Dunlin.
Friday 14th January 2010
The first-winter drake Ring-necked Duck was at Lough Gash (John N Murphy), along with 160 Tufted Ducks and 28 Gadwall.
This Ring-necked Duck at Lough Gash looks to be the same individual from Ballyallia in late 2010.
The drake Green-winged Teal was at Bell Harbour (James Hayes & Clodagh Glasgow).
Three White-fronted Geese were at Ballyallia Lake, Ennis.
There were three Greater Scaup and the Black Swan at Lough Murree.
One Water Rail was at Ballycar Lough, Newmarket-on-Fergus, while a flock of 20 Whooper Swans were at Ballygireen. 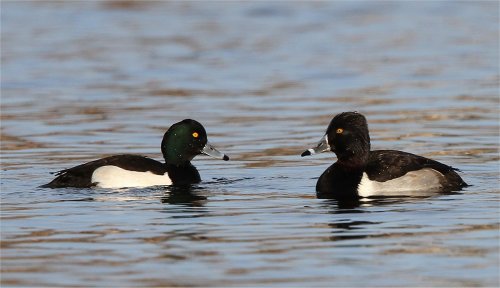 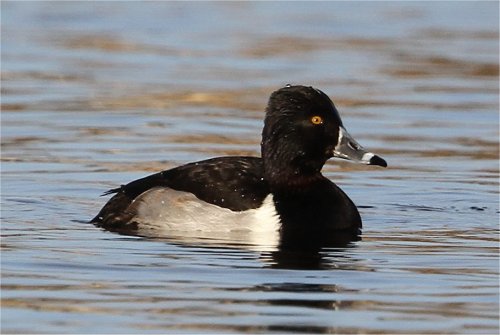 First-winter drake Ring-necked Duck at Lough Gash © John N Murphy
Thursday 13th January 2011
The drake Green-winged Teal was at Bell Harbour (Tim Griffin).
A first-winter male Ring-necked Duck was at Lough Gash, Newmarket-on-Fergus (Paul Troake), this is probably the bird from Ballyallia Lake.
Also at Lough Gash were 24 Gdawall, four Woodcock and a female Blackcap was in a nearby garden.
There were four Crossbills near Coolmeen, Sixmilebridge.
A flock of 17 Greylag Geese were at Fenloe Lake.
Wednesday 12th January 2011
There were a flock of 22 Whooper Swans at Ballycar Lake, Newmarket-on-Fergus.
Tuesday 11th January 2011
There were two Jack Snipe at Tullyvarraga Marsh, Shannon.
Five Little Egrets and one Water Rail were at the Shannon Airport Lagoon.
One Little Egret was at the attenuation pond near the Killow West Roundabout, Doora.
Monday 10th January 2011
The WHITE-TAILED EAGLE is still at Lough Atedaun (Dave McNamara).
One Velvet Scoter was at Lahinch along with 48 Common Scoter.
One female Goosander was at Ardclooney along with five drake Greater Scaup.
One Buzzard was at Inisculllen Hill, Shannon.
Two adult and two immature Bramblings were at St. Flannan’s College Ennis.
Two Chough were at Clahane.
A Jay was at Lees Road Wood.
Sunday 9th January 2011
One male Blackcap was at Willow Park, Ennis.
Saturday 8th January 2011
One female Smew was showing well at Lake Inchiquin this morning (Dave McNamra et al).
The drake Green-winged Teal was at Bell Harbour (Finbarr MacGabhann).
A Goosander and a Peregrine were seen at Dromore Nature Reserve.
A Black-throated Diver, Red-throated Diver and a Merlin were at the Rine.
Two Black-throated Diver and a Red-throated Diver were reported from Bishops Quarter.
A female Blackcap was at Oak Park Ennis.
Friday 7th January 2011
The WHITE-TAILED EAGLE (Star) was at  Dromore Nature Reserve along with three Goosander.
One female Velvet Scoter, a pair of Long-tailed Duck, four Great Northern Diver, eleven Red-throated Diver, two Black-throated Diver and forty Common Scoter were at Lahinch. 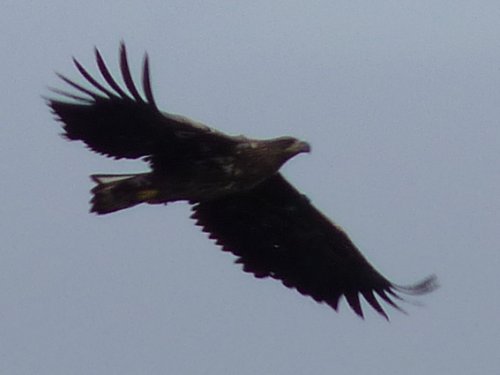 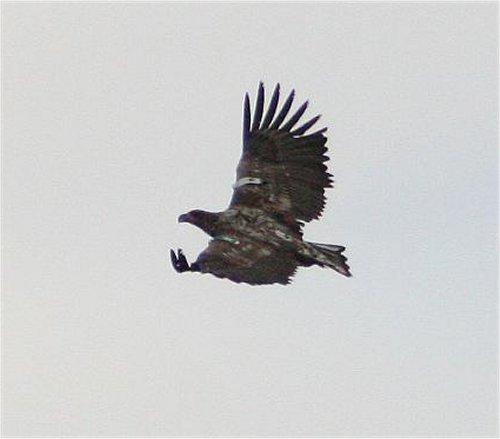 White-tailed eagle Dromore © Jeff Copner
Thursday 6th January 2011
The WHITE-TAILED EAGLE (Star) was at Dromore Nature Reserve (Finbarr MacGabhann), along with
a Kingfisher, three Jays and a Water Rail.
The immature Velvet Scoter, Slavonian Grebe, 30 Common Scoters, 14 Knot and five Red-throated Divers were at Liscannor Bay.
One female Hen Harrier, two Little Egrets, three Water Rails and ten Gadwall were at the Shannon Airport Lagoon.
One Green Sandpiper was at Ballycorick Bridge, Ballynacally.
One female Hen Harrier was near Fort Fergus along with 37 Whooper Swans.
Another 20 Gadwall were at Lough Gash, Newmarket-on-Fergus.
One male Blackcap was at a garden in Moanreel, Ennistymon.
A flock og 20 Whooper Swans were also along the riverside near Moanreel.
One Chough was at Clahane.
A female Blackcap was at Oak Park Ennis. 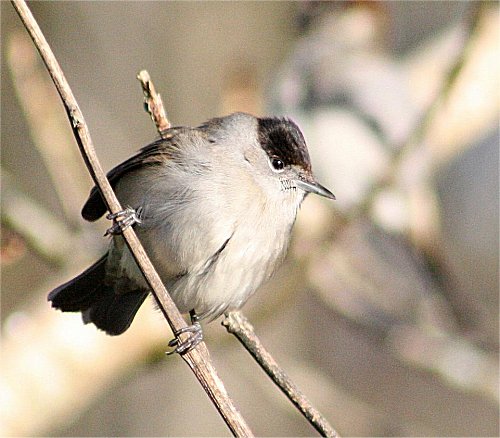 Male Blackcap at Jeffs garden in Moanreel © Jeff Copner
Wednesday 5th January 2011
Two Waxwing were seen this afternoon close to Hogan’s Shop on the Gort Road, Ennis.
Two Brambling were at St. Flannan’s College, Ennis.
One female Hen Harrier and 25 White-fronted Geese were at Lough Muchanagh.
There were two Chough and a Merlin at Clahane.
One Peregrine and 30 Whooper Swans were at Mullaghmore.
A flock of 40 Whooper Swans were at Kells Lake, the Burren.
One Little Egret was at the Killow West attenuation pond near Doora.
A female Blackcap was at Oak Park, Ennis.
One male Blackcap was in a garden at Moanreel. 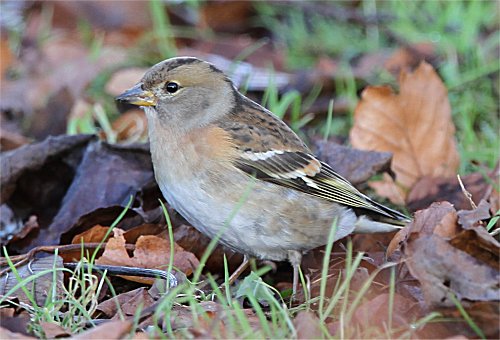 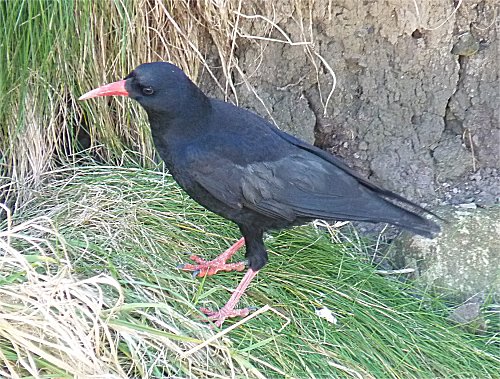 Chough at Clahane © Dave McNamara
Tuesday 4th January 2011
One male Hen Harrier was in Shragh Bog earlier this morning.
There were three White-fronted Geese at Ballyallia Lake, along with 14 Greylag Geese at Drumcliff, 132 Coot, 160 Tufted ducks and 43 Gadwall.
A female Blackcap was in a garden in Oak Park, Ennis.
The Black Swan was still at Lough Murree.
One male Blackcap was ina garden at Moanreel.
Monday 3rd January 2011
The WHITE-TAILED EAGLE (Star) was at Dromore Nature Reserve, Ruan today.  This bird came back into Clare from Limerick on 28th December 2010, made its way across the Shannon Estuary,  roosted near Kilrush before heading north-east to Dromore woods where it has stayed since.  To follow the movements of Star log onto www.goldeneagle.ie for more details.
One female Marsh Harrier was at Lough Cullaun, the Burren.
Sunday 2nd January 2011
There were ten Black-throated Divers off Finvarra Point and one first-winter male Eider was at Carrickadda.
One Black Swan was still at Lough Murree.
Saturday 1st January 2011
There were two Water Rails at Ballycar Lough, Newmarket-on-Fergus.
One Water Rail was at Ballyallia Lake, Ennis. 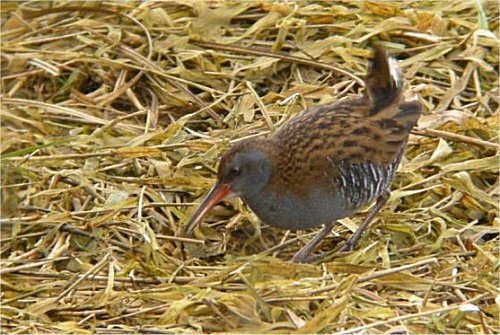