One adult Yellow-legged Gull was in Kilbaha Harbour, Loop Head. (John N Murphy)
Over 2,000 Manx Shearwaters, one Whimbrel and one Puffin flew south west past the Bridges of Ross.(JNM)
Two male Yellowhammer were at Carron Turlough.(Jeff Copner)
Two Puffin and 14 Chough were seen during the Branch outing to Loop Head.(Nuala and Tom Lynch, Clodagh Glasgow et al) 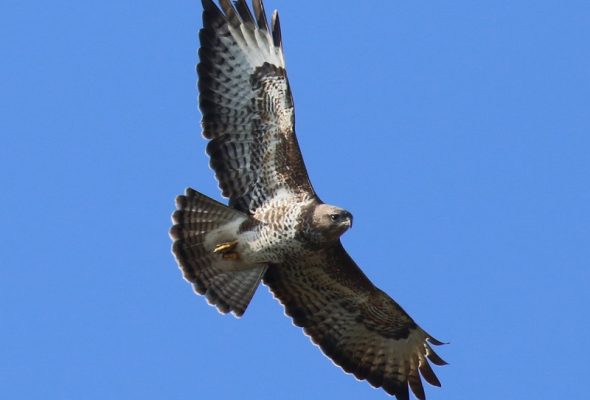 One of the two Buzzards at Ballycar John M Murphy

Two Buzzards were at Applewood, Ballycar. ( John N Murphy)
Two Peregrine were at the Kilrush Road, Ennis.(Dixie Collins)
One Yellowhammer was singing at the start of the Green Raod walk at Lough Avalla.(Stan Nugent)

Two Buzzards were at Applewood, Ballycar. (JNM)
One pair of Yellowhammer were at Glenroe west of Mullaghmore.(Nuala Lynch and Mary Curtin)

There were two Reed Warblers at the Shannon Airport Lagoon. (John N Murphy)
Two Buzzards were at Applewood, Ballycar. (JNM)

Four Jay were at Lees Road Wood this morning.(Nuala and Tom Lynch)

A Common Sandpiper and a Yellowhammer were at Mullaghmore.(Cliff Baxter)

A Great Skua and eight Chough were at Loop Head.((Nuala and Tom Lynch et al)