Two Jay were at Lees Road Wood.(Nuala and Tom Lynch)

Two Yellowhammer were at Rinnamona.(Nuala and Tom Lynch)

A Willow Warbler was singing at Addroon Bridge.(Cliff Baxter)
Three adult Mediterranean Gull and a Black-headed Gull with a green band with white writing on its left leg and a metal ring on its right leg were at Corraunroo.(Páidí Cullinan)
A Dipper was at the Caher Valley.(PC)
A Stock Dove was at Ballyvellaghan Lake(PC)
Seventy Manx Shearwater were 2-3 miles north of Loop Head.(John Collins)
Two Buzzard were circling over the M18 at Bunratty.(Nuala and Tom Lynch) 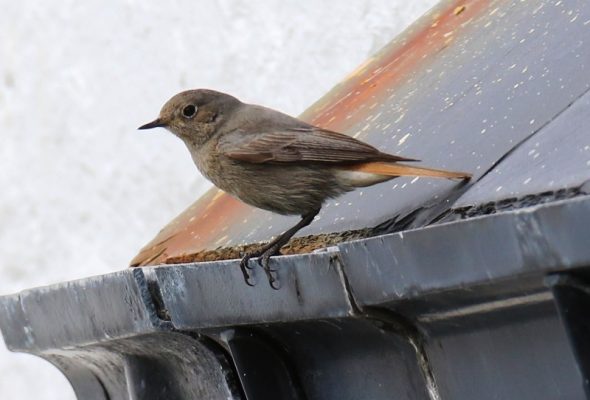 A Black Redstart was at Loop Head.(John N. Murphy)
A Buzzard was on the side of the M18 near Tubber, on the Clare-Galway border (Tom Tarpey).

A Short-eared Owl was hunting the marsh at Islandavanna this evening.(Nuala and Tom Lynch)

Three Tree Sparrows and a Swallow were at Doonbeg.(Páidí Cullinan)
A Short-eared Owl and a Hen Harrier were at Islandavanna this evening.(Dixie Collins)

A very early Cuckoo was heard in Doora this afternoon.(Vincent Killowry)
The first Swallow of the year reported in the County was at the Gort Road, Ennis this afternoon.(Chris Cullen)
Two Common Sandpiper were at Clarecastle Pier.(Páidí Cullinan)
A Blackcap was singing at Ballyallia.(Nuala and Tom Lynch)
Sixteen Whooper Swan flew north over Rathclooney, Crusheen this morning.(Jason Horner)

Twelve Black-throated Diver, 45 Great Northern Diver, 75 Brent Geese, two Sandwich Tern and 40 Red-breasted Merganser were seen at Ballyvaughan Bay during the monthly Branch outing.Fourteen Common Scoter and a Red-throated Diver were off Gleninagh Pier.(Brian Finnegan, Austin Cooney, Nuala and Tom Lynch, Maura Turner et al)
Over a hundred Great Northern Diver were off Black Head this morning.(Jeff Pearson)
A Surf Scoter was off Gleninagh Pier later this afternoon.(Niall Keogh)
Eighteen Red-throated Diver and 60 Common Scoter were at Liscannor.(Finbar MacGabhann)
Two hundred and eighty Barnacle Geese were at Mutton Island.(FMG)
Two Manx Shearwater were at Loop Head.(FMG)
A male Hen Harrier was at Kilcreadaun.(FMG)
A Peregrine was at Carrigaholt.((FMG)