One Barn Owl was at Applewood, Ballycar. (Edel Murphy & John N Murphy)
One Buzzard was near Bunratty. (JNM) 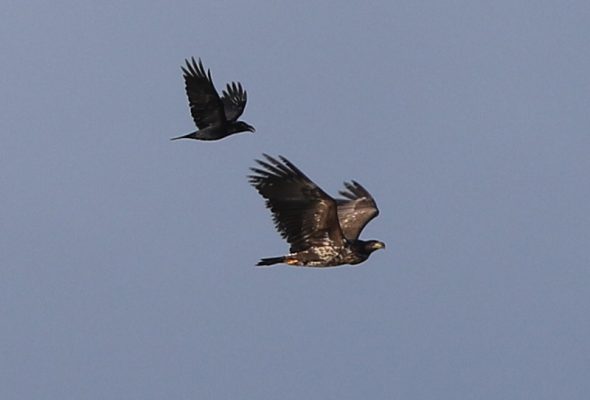 A White-tailed Eagle was at Ballyallia this morning. (Dixie Collins, John Collins, John N. Murphy & Mary Fallon)
One drake Green-winged Teal was at the Shannon Airport Lagoon. (John N Murphy)
A Jay was in a garden at the Cahercalla Road, Ennis. (Paul McKenna)
A Short-eared Owl was near Lisheen Bog.(Dixie Collins)

A White-tailed Eagle without any wing tags and a drake Pochard was at Ballyallia early this afternoon.(Páidí Cullinan)

A Short-eared Owl was at Doonbeg Beach(Christy Carroll)

Three Mediterranean Gull, two Spotted Redshank,123 Great Northern Diver, two Red-throated Diver and 78 Black Guillemot were at Coraunroo.(Paul Troake)
Black-headed Gull with white darvic ring on left leg with black inscription 29HB back at Ballyallia today. This bird was ringed as a nestling on the 3rd of June 2014 at Cokes Pot, Somerford Keynes, Gloucestershire, UK. Found at Ballyallia on the 3rd of February 2017 and 7th of November 2017. Found 976 days after it was ringed 496km from ringing site-BTO.(Paidi Cullinan)
A Short-eared Owl was at Doonbeg(Elaine Keegan)

One Green Sandpiper was at Lough O Grady. (John N Murphy)
Three Jay were at Bodyke with another at Applewood, Ballycar. (JNM)
One Buzzard was near Kilkishen along with 46 Greylag Geese near Cullaunysheeda Lake.(JNM)