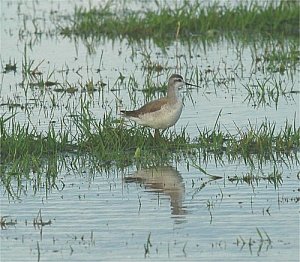 A first winter Wilson’s Phalarope turned up at a small flooded field near Ross Bay
Loop Head on Saturday morning 23rd September approximately 8.45am.
Found by John Murphy and later seen by Brian Finnegan, Austin Cooney and
Christy Meehan.  The bird was accompanied by a colour ringed juvenile Black-tailed
Godwit and it remained feeding in the field up to about 11.30am.  It only departed
when a immature female Hen Harrier flew over a hedge and into the field flushing the
phalarope who flew high into the air and headed south eastwards trailing along behind
a Ringed Plover who was also getting out of town due to the harrier. 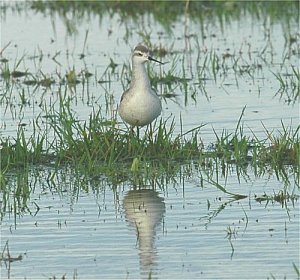 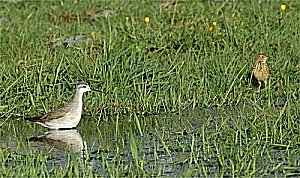 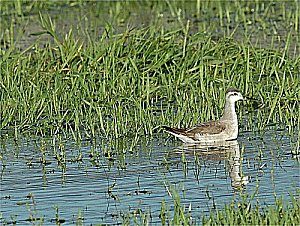 This was a third county record of this rare Nearctic vagrant.

National Hen Harrier Winter Roost Survey 2007/2008 News
Volunteers across the country are now at the half way point in the
National Hen Harrier Winter Roost Survey. After beginning in October (many even in
August and September), a large amount of information has been built up, giving a
greater knowledge and understanding of what Irish Hen Harriers get up to during the
other 6 or 7 months of the year when not engaged in the breeding season.
Fixed roost watches and casual sightings continue to pour into co-ordinator Barry

opportunity at the half way point to thank those who have got out there and filled the
forms and/or submitted casual sightings. From Strangford Lough to West Kerry,
Longford to Limerck, Inisowen to West Cork, Connemara to Dublin, it has been a
pleasure hearing from you all and learning of the whereabouts of Hen Harriers during
the winter. Some have had the pleasure of sighting some of the youngsters which we
tagged in Cork, Kerry, Clare and Galway this year. Anyone that has seen harriers
tagged or untagged will agree it is a most enjoyable survey, and even those who have
gone out in search of new roosts but have not seen harriers on a particular evening
have usually been entertained by the wealth of bird life at these wetlands at sunset.
Marsh Harriers, Peregrines, Barn Owls just some of the other Birds of Prey sighted in
this years survey for example, not to mention the thousands of starlings and various
waterbirds.
Indeed a good number of new Hen Harrier winter roosts have been discovered this
winter – places heretofore unknown. Furthermore, old traditional roosts which have
not been watched for years are being returned to in aid of this survey. It cannot be
stressed enough how important it is to keep Hen Harrier winter roost locations secret.
In reports which will be generated for the whole country out of this survey, roost
locations are not mentioned – most often they are masked by giving the nearest town
name or a name of the observers choosing (as per record sheet).
People can fill roost record sheets (and casual sightings forms) as they go along and

submit to harriers@environ.ie or to Barry O’Donoghue, Ballynabrennagh, Tralee, Co.

Kerry bit by bit or together at the end of season. It is important to fill the roost details
sheet (just once for each roost) as it will let us know what harriers require for their
roosting habitat. It is further important to log watches where no harriers have been
seen. This will allow trends to be drawn at a roost as the winter progresses e.g. maybe
all harriers gone by January, or maybe they don’t come until November etc.

This Saturday 1st December is roost watch day (1st day of month). Being a weekend, it

is our best chance at co-ordinating a mass roost watch across the country. I urge
everyone to get out there this weekend either Friday, Saturday or Sunday from
3.45pm to 4.45pm (or alternatively for morning watches from 07.30am to 08.30am).
Anyone with queries or comments please do not hesitate to make contact with me at

and West Clare is organising a new winter Hen Harrier Roost Survey this
year and is looking for some help across the county and beyond. The
first of these counts will take place this weekend 1st – 2nd October or
a close as possbile to this date. 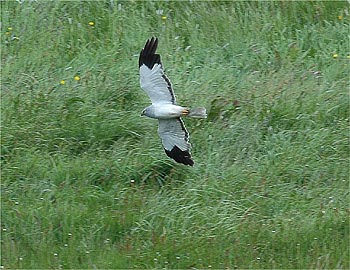 Saturday 30th September 2006
There were four Little Stints and two Curlew Sandpipers at
Seafeild beach Quitly this afternoon along with one Peregrine.
There was one first-winter Mediterranean Gull at Lahinch marsh
as well as two Peregrines.
There was one Peregrine at Lough Gash, Newmarket-on-Fergus.
There were three Hen Harriers at Tullagher Bog.

Sunday 24th September 2006
There were four Little Stints at Seafield, Quilty this afternoon.
At Loop Head this morning there was one juvenile Black Tern,
10 Arctic Skuas, three Bonxies and four White Wagtails.
One Water Rail was at Ballycar Lake along with one singing Chiffchaff.

Saturday 23rd September 2006
There was a Wilson’ Phalarope at Loop Head this morning (John N Murphy, Brian Finnegan,
Austin Cooney & Christy Meehan).
Along with one Pectoral Sandpiper, two Hen Harriers, one Peregrine,
28 Rock Doves, three Common Scoter, one White Wagtail and four Wheatears.
One Barn Owl was at Kilkee.
One Water Rail was at Shannon Airport Lagoon.
There were seven Brent Geese at Doonbeg. 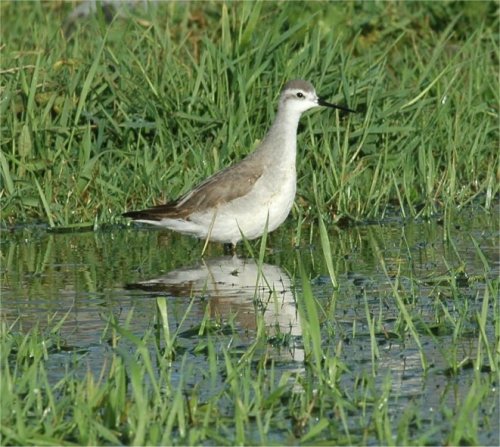 There was a Marsh Harrier at Ballyallia Lake this afternoon (Stan Nugent).
At Carrigaholt there was two Curlew Sandpipers and one White Wagtail.
One Water Rail was at Kilcredaun Marsh.
One Little Egret was a Poulnasherry Bay.
There were three Little Stints, five Curlew Sandpipers and two White
Wagtails on the beach at Seafield, Quilty. 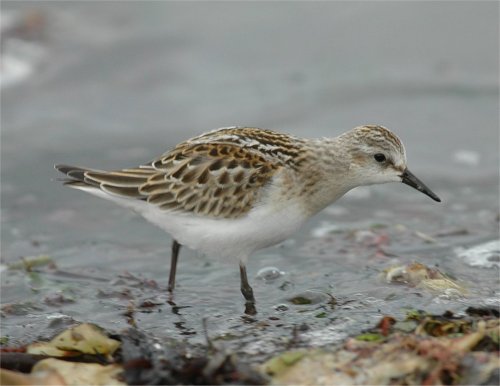 Friday 22nd September 2006
One Pectoral Sandpiper was near Lough Donnell today.
One female Hen Harrier was at Loop Head.

Thursday 21st September
There were four Little Egrets at Poulnasherry Bay today.
There were two Mediterranean Gulls at Quilty along with,
two juvenile Curlew Sandpipers, 150 Turnstone, 200 Ringed
Plover, 30 Sanderling and 60 Dunlin.
18 Wheatears were at the west end of Kilkee.

Sunday 17th September 2006
The Osprey was still at Lahinch Marsh (Brian Arthurs, John N Murphy
Dave McNamara, Hugh Delaney, Richard Bonser et al).
There was also two Peregrines, one Kingfisher and seven Chough.
One Ruff was at Doonbeg.
Five Curlew Sandpipers were on the Beach at Lurga Point.
The Long-billed Dowitcher was still at the Shannon Airport Lagoon
(Richard Bonser et al) along with two Ruff and four Curlew Sandpipers.

Saturday 16th September 2006
The Osprey was once again seen at Lahinch along with 14 Chough
(Brian Finnegan & Austin Cooney).
The Long-billed Dowitcher was back in the Shannon Airport Lagoon
(John N Murphy et al). Also at the Lagoon was the Pectoral Sandpiper, one
Spotted Redshank, 14 Curlew Sandpipers and a Peregrine.
One Little Egret was at Clenagh Lake, Newmarket-on-Fergus. 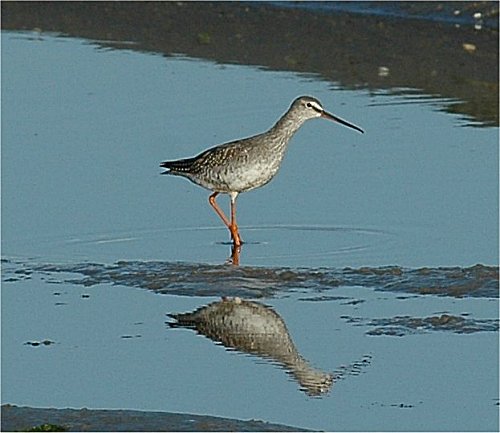 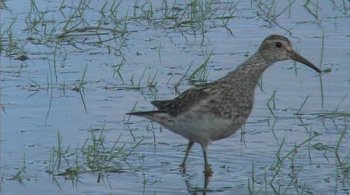 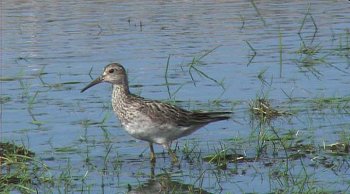 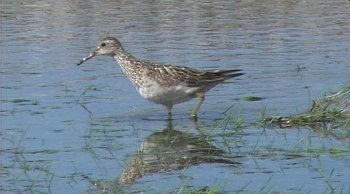 Thursday 14th September 2006
The Osprey was once again seen at Lahinch today(Tim Griffin).

Tuesday 12th September 2006
An Osprey ws found today (Dave McNamara) at Lahinch in the
Ennistymon Marsh area behind the castle at the Bridge on the
north end of the town.

Monday 11th September 2006
Two Pectoral Sandpipers and one Ruff at Lough Donnell this morning.
Three Curlew Sandpipers on the beach between Lurga point and Lough Donnell.
The Long-billed Dowither was re-located at the Shannon Airport Lagoon
today (John Wright).

Sunday 10th September 2006
The Little Ringed Plover was still at Lough Donnell (Brian Finnegan &
Austin Cooney & Brian Arthurs) along with two Pectoral Sandpipers.
There were five Curlew Sandpipers and two Little Stints on the shore
half way between Lurga point and Lough Donnell.
There was also one female Hen Harrier close to Lough Donnell.
One Jay was on the Lees Wood Road this evening. 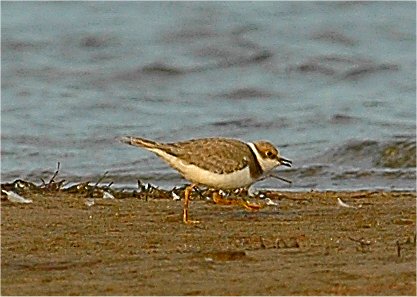 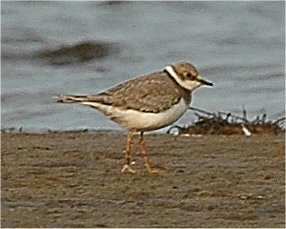 At Lough Donnell there were also four Pectoral Sandpipers, one Common
Sandpiper and one Ruff.
Four Curlew Sandpipers were near Lurga Point.
One Common Sandpiper was at Doonbeg.
The white Curlew and two Little Egrets were at Poulnasherry Bay.

Friday 8th September 2006
There was  a Kingfisher on the Roche site, Clarecastle.

Thursday 7th September 2006
There was a Kingfisher,a Common Sandpiper and 22 Greenshank at Doonbeg. 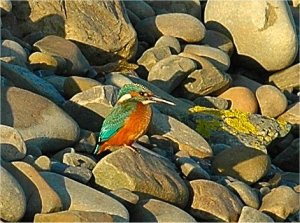 Wednesday 6th September 2006
There was one juvenile White-rumped Sandpiper at the
Shannon Airport Lagoon this evening (John N Murphy).
There was also a large number of other waders as follows;
one Pectoral Sandpiper, one Curlew Sandpiper, two Ruff,
two Spotted Redshank, one Sanderling, one Greenshank,
500 Redshank, 1,000 Black-tailed Godwit, 900 Dunlin, 12 Knot,
11 Ringed Plover, 400 Black-headed Gulls, one male Sparrowhawk
and one female Wheatear.
The Green Sandpiper was still at Doonbeg along with one Kingfisher.

Tuesday 5th September 2006
There was a Green Sandpiper at Doonbeg Bay this morning, along
with ten Greenshank and a good mixed flock of Dunlin and Ringed Plover.

(Maeve & Christy Meehan).
This morning at the Shannon Airport Lagoon the Pectoral
Sandpiper was still present along with two juvenile
Curlew Sandpipers, a large mix of other waders and
one Peregrine.
Saturday 2nd September 2006
Passage at the bridges of Ross was not great with only
25 Great Shearwaters, 16 Sooty Shearwaters, five Balearic
Shearwaters, four Pomarine Skuas, 22 Arctic Skuas,
8 Bonxies, 15 Storm Perets, one each’s Pettrel and one
Black Tern.
There was a Pectoral Sandpiper at Poulnasherry Bay with three
Little Egrets.
Four Little Stints were at Quilty.
One adult Mediterranean Gull wearing a yellow leg ring was at Kilkee.
Friday 1st September 2006
There was good migration at the Bridges of Ross this morning with
ten Cory’s Shearwaters, 227 Great Shearwaters, 305 Sooties,
six Balearic Shearwaters, 14 Pomarine Skuas, 40 Arctic Skuas,
11 Bonxies, 15 Sabine’s Gulls, 14 Leach’s Petrels and one
Black Tern.
Tweet
Leave a comment