Tuesday 31st October 2006
There was one Snow Bunting at Doolin.
Two Dippers were on the Claureen River in Kilmaley.

Sunday 29th October 2006
There was a Brambling near Gibson’s garden at Kilbaha and
one male Hen Harrier, one Merlin and one Peregrine on the headland.

Saturday 28th October 2006
The Glaucous Gull and one Merlin were at Seafield, Quilty.
One Dipper was on the Claureen River today with one Merlin
seen hunting at Lough Donnell.

Friday 27th October 2006
There was a flock of 450 Great Black-backed Gulls at Lough Donnell.

Thursday 26th October 2006
There was one Glaucous and two first-winter Mediterranean
gulls at  Quilty beach today.  One Black-throated Diver was
in Doonbeg Bay.

Monday 23rd October 2006
The Hoopoe was back in John & Mary Lynch’s garden at Moyasta today.
Two Whooper Swans were on the beach in Kilkee.

Sunday 22nd October 2006
Two Great Skuas were seen flying along the Rine in Ballyvaughan.
There were 20 Greenland White-fronted Geese at Tullagher Bog today.
One Whooper Swan and one Water Rail were at Ballycar Lake, Newmarket-on-Fergus.

Saturday 21st October 2006
Today at Loop Head there was one Yellow-browed Warbler (John N Murphy
John Rattigan & Finbarr MacGahann). There was also one Lapland Bunting,
two Chiffchaffs, 16 Chough, one Merlin, and in fields near the Bridges of Ross
there was one Canada Goose in a small flock of nine Barnacle Geese.
This is a Richardson’s Canada Goose (Branta hutchinsii hutchinsii).
There was a small flock of 15 Whooper Swans at Doonbeg Bay and three more
flew over Tullagher Bog. 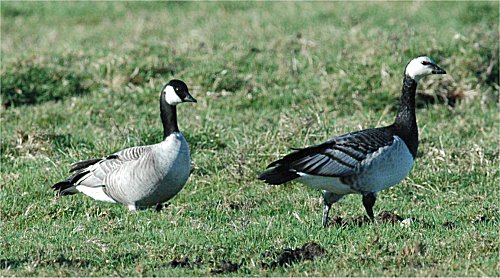 Thursday 19th October 2006
There was good Redwing migration throughout the county today.
News from around the country a Hermit Thrush has been found on
Cape Clear Island this morning and the Isabelline Shrike has re-appeared
on the Old Head of Kinsale in the exact same bush.

Wednesday 18th October 2006
There were four Little Egrets at Blackweir Bridge this morning.

Tuesday 17th October 2006
The Green Sandpiper was still at the Falls in Ennistymon.
The Hoopoe which was reported from Moyasta was still present today.
This news was only received on the evening of Wednesday 18th after the
bird had departed the garden.

Monday 16th October 2006
The American Golden Plover was at Doonbeg this morning (Stan Nugent).
One Green Sandpiper was showing well at the Falls at Ennistymon this afternoon.
The Hoopoe was still at Moyasta.
News from around the country there was a Red-throated Pipit on Dursey
Island in west Cork earlier today.

Sunday 15th October 2006
The American Golden Plover was at Doonbeg again today (Stan Nugent).
There was no news of the Canada Warbler or the Red-eyed Vireo from Loop.
The Hoopoe was once again in a garden in Moyasta today.
Two Redwings were seen at Ballycar this evening. 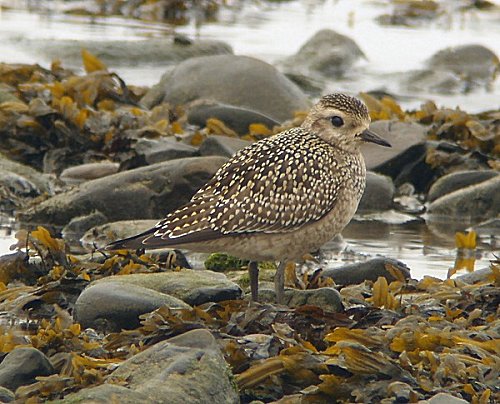 Saturday 14th October
There was no sign of the CANADA WARBLER at Loop Head today.
The Red-eyed Vireo was once again at the west end of Kilbaha gardens,
one Snow Bunting was near the Lighthouse three Melins, one Hen Harrier
24 Chough and one Swallow were also seen on Loop Head.
There was two Bonxies and one Arctic Skua off the pier in Kilbaha.
A Hoopoe was found in a local garden in Moyasta today.
The American Golden Plover was still at Doonbeg (see photos below).
One Curlew Sandpiper and two Little Stints were on the beach at Seafield, Quilty.
One Green Sandpiper was at the Falls at Ennistymon. 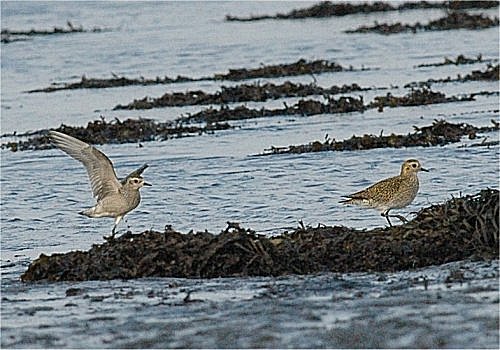 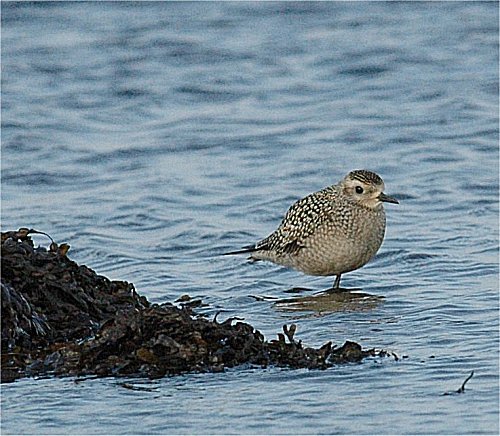 Friday 13th October 2006
The CANADA WARBLER showed well this evening at Kilbaha.
No sign of the Red-eyed Vireo.
The American Golden Plover was in the Bay at Doonbeg (Dave McNamara).
There was one Kingfisher and a Water Rail at Balllycorick Bridge near Ballynacally.

Thursday 12th October 2006
The CANADA WARBLER was once again on dsiplay this morning in
the same garden at Kilbaha, the Red-eyed Vireo was seen late this evening.
One male Hen Harrier was in the bog at Loop Head, 12 Brent Geese
were near Ross Bay and one White Wagtail.
Two female Hen Harriers were seen hunting over Farrihy Lough
late yesterday evening.
News in from Cape Clear, a Baltimore Oriole was found there this afternoon.

Wednesday 11th October 2006
The CANADA WARBLER has been showing well this morning in Peter
Gibson’s Garden in Kilbaha.  The Red-eyed Vireo has moved close to
this area as well.  The Red-breasted Flycatcher was spotted on the
harbour wall in Kilbaha and two Spotted Flycatchers and one Merlin
were alos on the headland.
There was an American Golden Plover (Dave McNamara)(time 14.00) with
the flock of Golden Plover at Doonbeg Bay.
One Mediterranean Gull was at the mouth of the Skivileen river near the
Doonbeg Golf Course Club house in Doughmore Bay.
Two Common Sandpipers were on the pier in Clarecastle.
One Green Sandpiper, one Little Egret and three Whimbrel were at Moyasta.
Other news from around the country there was a Little Bunting and
a Yellow-browed Warbler this morning on Dursey Island in Cork but
no sign of the Blackpoll Warbler.

Tuesday 10th October 2006
The CANADA WARBLER was still at Kilbaha Loop Head this morning.
There was an unconfirmed report of a Yellow-rumped Warbler at
Poulnasherry Bay from yesterday.  This bird has not been re-located.
The Purple Heron has re-appeared at Lough Donnell (Dave McNamara).
There was also a report of a juvenile Pink-footed Goose in fields along
the coast road just outside Kilbaha.
The three Green Sandpipers were still at Ballycorick Bridge.
Other news from around the country a Blackpoll Warbler was found
on the west end of Dursey Island in Cork this morning.

Monday 9th October 2006
The CANADA WARBLER is showing very well this morning at Loop Head.
Also present was the RED-EYED VIREO, one Red-breasted Flycatcher ,
and one Common Rosefinch. The Spotted Sandpiper has not been seen
since Saturday.
Three Green Sandpipers were at Ballycorick Bridge, near Ballynacally. 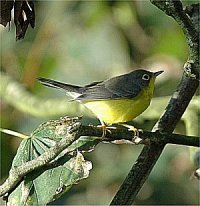 Sunday 8th October 2006
A CANADA WARBLER was found at Kilbaha this afternoon (Maurice Hanafin).
This is a first Irish record and only a second for the western palearctic.
It went to roost this evening at Gibsons Garden which is half way on the
road to the lighthouse from Kilbaha.  Anyone visiting this area is asked to please
park your cars at Kilbaha and not in front of Peters farm as he needs room to
get his trucks in and out of the farm yard.  Also there is not admittance into the
farmyard.  Please stick to these rules.
The RED-EYED VIREO was aslo seen in the garden behind Keatings Pub but there
was no sign of the Spotted Sandpiper.
Other news the Pink-footed Goose was at Lahinch Marsh today along with
one Barnacle Goose, one Glaucous Gull and two Mediterranean Gulls. 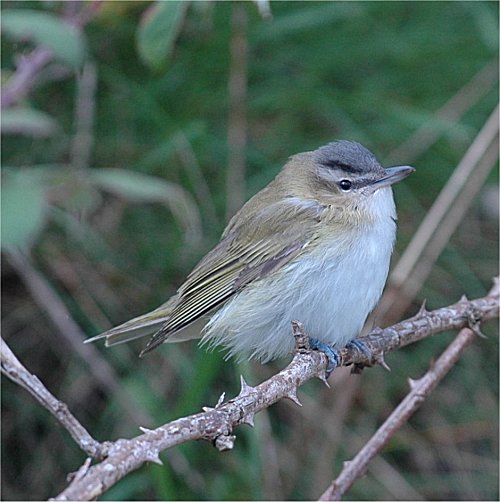 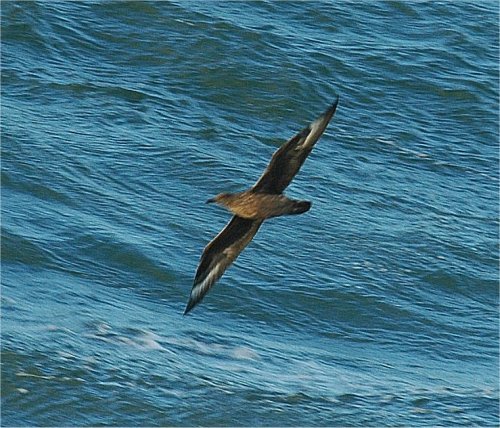 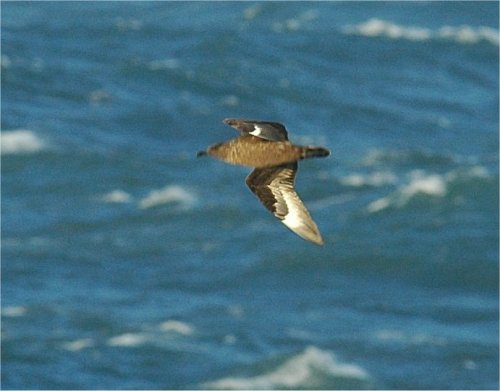 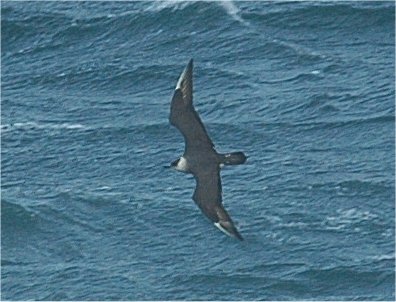 Wednesday 4th October 2006
The Purple Heron was seen flying south away from Lough Donnell
today (Dave McNamara),  two Little Stints were aslo at the lough.
There were two Ruff at Doonbeg.
Two Green Sandpipers were at Ballycorick Bridge, Ballynacally.
One adult Mediterranean Gull was at Liscannor. 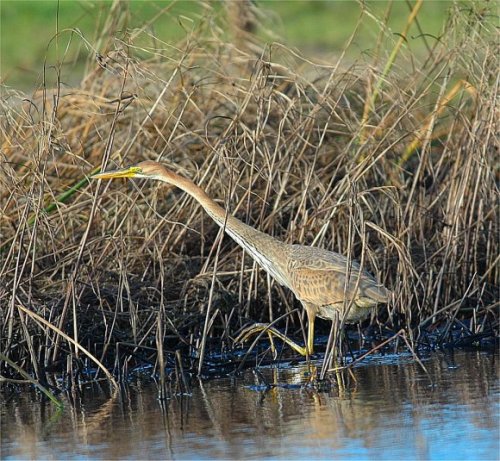 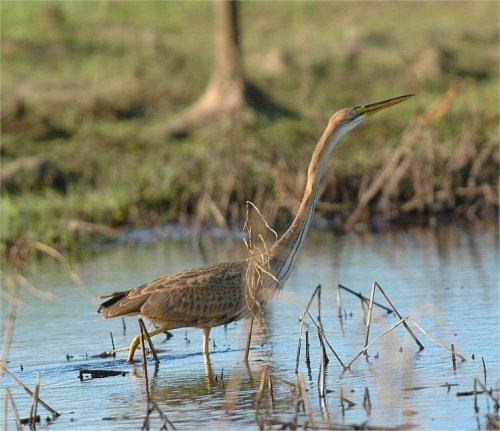 There were five Little Stints on the beach at Seafield, Quilty
with another single bird at Lough Donnell and one Merlin.
A Pink-footed Goose was at Lahinch Marsh this evening.

Monday 2nd October 2006
One calling Common Crossbill flew over Ballycar this afternoon.
There was one Common Sandpiper at the mouth of the Skivileen
River in Doonbeg.