Wednesday 31st October 2007
There was a  WATER PIPIT at Clahane late this afternoon (Dave McNamara).
This bird was first taught to be a Buff-bellied Pipit, different bird to the bird originally
found there some weeks ago, but closer scrutiny revealed that it was actually a Water
Pipit and only the third record for Clare.
The Common Rosefinch was seen again this morning at Kilcredaun (Finbarr MacGabhann & Stan Nugent).
Seven Little Egrets were at Moyasta, Poulnasherry Bay.

Tuesday 30th October 2007
The four ARCTIC REDPOLLS were still present this morning
at Kilcredaun (Denis O Sullivan et al).
The Common Rosefinch was still on the track near the lighthouse at
Kilcredaun (John N Murphy & John Rattigan), along with one
Chiffchaff and two Merlins.
One Black Redstart was at Loop Head.
One Little Egret was at Carrigaholt.
A Flock of 50 Siskins were seen near Tullycrine, Kilrush.

Monday 29th October 2007
Four ARCTIC (COUES’S C.h.exilipes) REDPOLLS were found along the road to Kilcredaun Lighthouse
late this afternoon (John N Murphy, Finbarr MacGabhann & Maeve Meehan).
These are the first Clare records and only the fifth for Ireland.
A Common Rosefinch was also at Kilcredaun (John N Murphy & Finbarr MacGabhann).
At the Bridges of Ross there were two Arctic Skuas and one juvenile
Sabines Gull was off Loop Head. 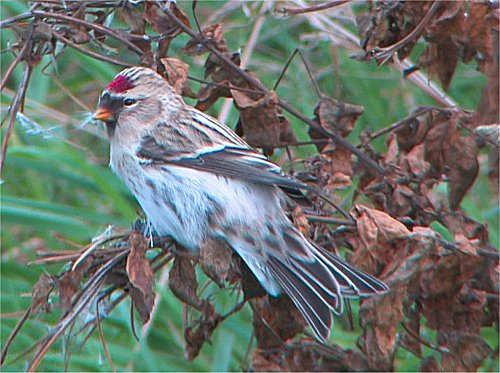 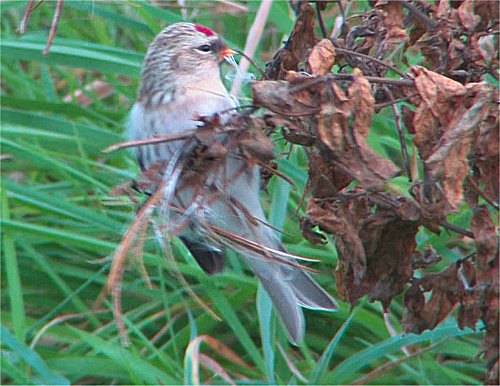 Saturday 27th October 2007
Two Twite were at Ross Bay Loop Head.
There was one Pomarine Skua at Bridges of Ross.
One Merlin was at Kilcredaun Marsh with another at Carrigaholt.

Thursday 25th October 2007
One Twite and one Whimbrel were at Clahane, Liscannor Bay.
One Barn Owl was at Moyasta late this evening.
One Peregrine was at Lahinch Marsh.

Saturday 20th October 2007
One Barnacle Goose was at Lahinch Marsh.

Wednesday 17th October 2007
There were two Little Egrets at Querrin.
A group of 13 Little Egrets and two Green Sandpipers
were at Moyasta and Poulnasherry Bay.
Only 12 Greenland White-fronted Geese have returned
so far this year to Tullagher Bog.

Sunday 14th October 2007
At Loop Head there was one Snow Bunting, one Twite, one Lesser
Whitethroat, 20 Siskin, three Merlin, one Peregrine, one female
ring-tailed Hen Harrier and three Wheatears.

Saturday 13th October 2007
The BUFF-BELLIED PIPIT is still at Clahane (Christy Meehan, Brian Finnegan & Mike Davis).
One Mediterranean Gull and one Little Gull were at Liscannor.
A second-winter Ring-billed Gull was at Quilty.
Two Curlew Sandpipers and one Little Stint were at Seafield, Quilty.
One Merlin was at Lough Donnell.

Friday 12th October 2007
The BUFF-BELLIED PIPIT was at Clahane (Eric Dempsey).
The Long-billed Dowitcher was once again at the Shannon
Airport Lagoon (Finbarr MacGabhann & Eric Dempsey). 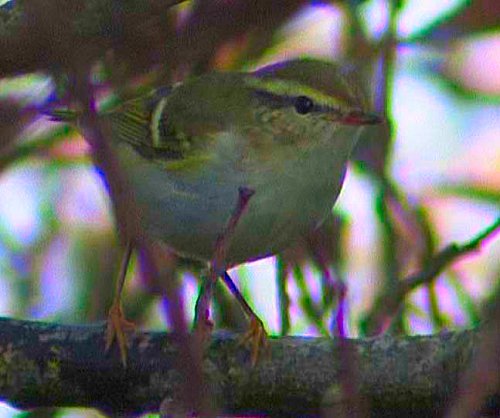 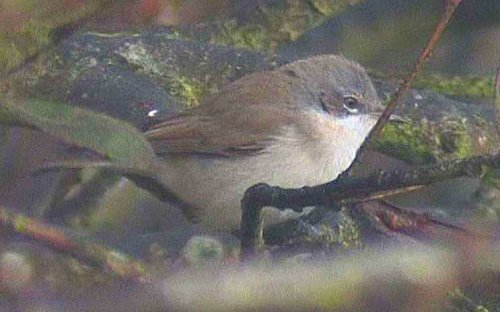 Tuesday 9th October 2007
The BUFF-BELLIED PIPIT was once again at Clahane this morning (Pat Brennan).
One Curlew Sandpiper and one Little Stint was at Seafield, Quilty.
Two Green Sandpipers and one Kingfisher were at Ballycorrick Bridge, Ballynacally.
A flock of 30 Red-throated Divers were at Liscannor Bay.
A Peregrine and one Merlin were at Lahinch Marsh. 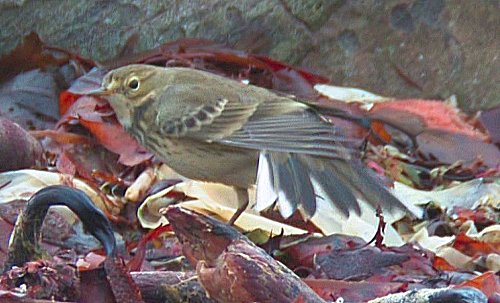 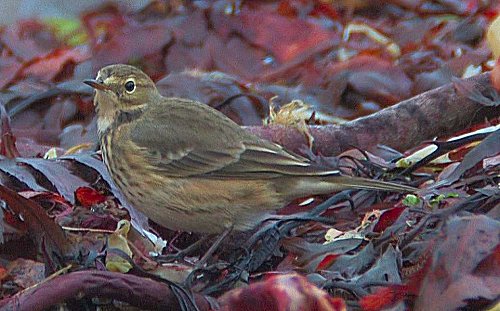 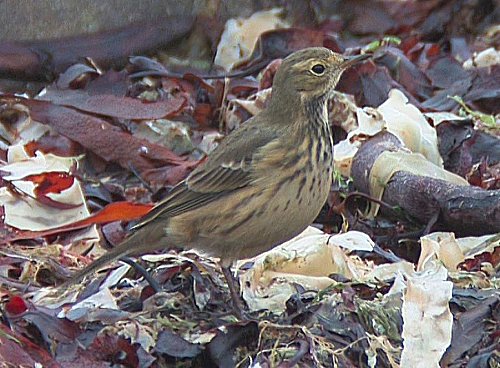 Sunday 7th October 2007
A BUFF-BELLIED PIPIT was at Clahane beach, Liscannor Bay late this afternoon
(Dave McNamara, John N Murphy, Finbarr MacGabhann, Aidan Kelly et al).
This is only the 3rd or 4th Irish record and the 1st for Clare another great find by Dave. 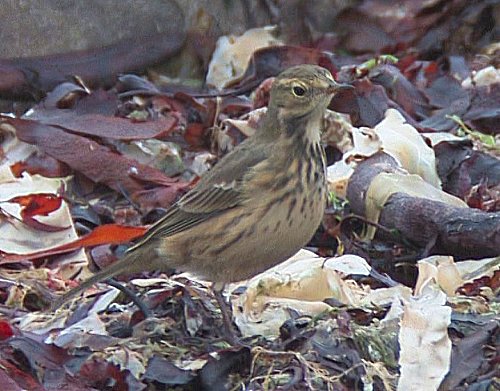 There was one Twite and three Tree Sparrows at Loop Head.
A female Hen Harrier was at Lough Donnell.
One Peregrine and two White Wagtails were also at Clahane.
One Greylag Goose was at Ballycar Lough this morning. 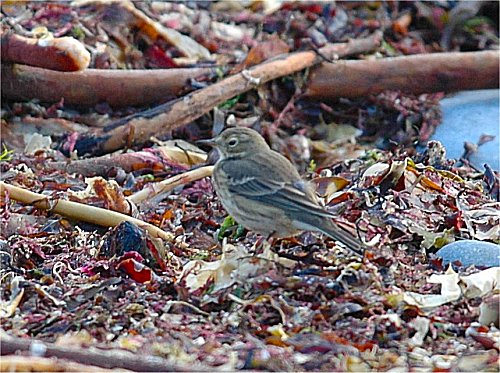 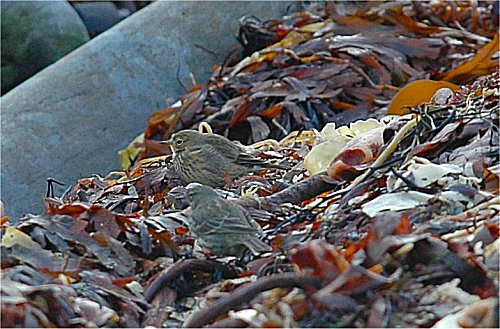 Friday 5th October 2007
The Long-billed Dowitcher was at the Shannon Airport Lagoon again
today (Finbarr MacGabhann) along with one Little Egret.

Thursday 4th October 2007
An immature Long-tailed Skua was at Rineville Bay, near Kilcredaun Marsh
this evening along with one Pomarine Skua and 1,500 Kittiwakes.
At Loop Head there was one female Hen Harrier, three Merlin,
seven Kestrel, 45 Golden Plover, 50 Skylark, 16 Chough,
two Wheatear and  two Ravens.
One Little Egret was at Carrigaholt.
Nine Little Egrets, one Green Sandpiper and on Kingfisher were at
Moyasta, Poulnasherry Bay.
One Water Rail was at Ballycar School near Fin Lough, Newmarket-on-Fergus.

Tuesday 2nd October 2007
There was no sign of the flycatchers at Loop Head today.
Twenty Red-throated Divers and two Great Northern Divers.
One Dipper was on the Claureen River near Kilmaley.
Monday 1st October 2007
There were  two Red-breasted Flycatchers and one Yellow-browed Warbler
at Loop Head (Tom Tarpey), along with three Pied Flycatchers,
one Turtle Dove and one Blackcap.
One Long-billed Dowitcher was at the Shannon Airport Lagoon (Richard Bonser).
Tweet
Leave a comment