The immature drake Lesser Scaup was still at Lough Gash, Newmarket-on-Fergus (John N Murphy & John Rattigan), along with one drake and one hen Greater Scaup, 50 Tufted ducks,70 Little Grebes and one Jay.
One Little Egret was at Drumcliff, Ballyallia Lake.
A small flock of 30 Common Scoter and six Red-throated Divers were on Liscannor Bay. A flock of 60 Dunlin were in Liscannor Harbour while 80 Golden Plover and 50 Lapwing were near Liscannor Marsh.
One male Blackcap was a garden at Oak Park, Ennis.

The 14 Waxwings were on show at Castletroy Golf Club again today.
A Dipper was at Caherconlish.
Black-headed Gull Yellow 286B was at Thomond Weir. This 2008 Lough Mask ringed bird was last seen in Limerick City on March 4th last.

Three Whooper Swans flew over the Christmas Day swimmers at Castleconnell.
The 14 Waxwings were on show opposite Castletroy Golf Club. 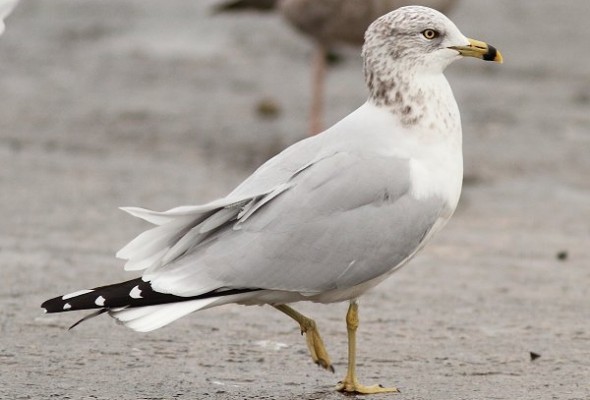 The Yellow-legged Gull was at Thomond Weir today(Tom Tarpey).
The 14 Waxwings were showing well again at the Golf Links Road, Castletroy.
An adult Ring-billed Gull was at O’Callaghan’s Strand. This is the first report this winter of what is presumed to be a returning individual from previous winters.
A Redshank was at Clancy’s Strand.