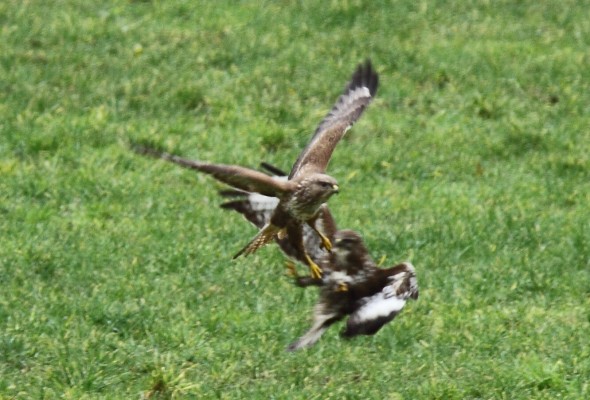 Two Buzzards were seen just west of Adare again this morning. The paler bird is clearly a first year bird while the darker bird appears to be an adult.
A Buzzard was also seen today near Granagh.
The first winter Glaucous Gull was on the pontoon to the right off Arthur’s Quay, Limerick City, again this afternoon.
The adult winter Ring-billed Gull was on the north shore of the river just downstream of Shannon Bridge, Limerick City.
310 Wigeon, 140 Teal, 28 Shoveler, a Pintail, 271 Tufted Duck and a male Scaup were at Lough Gur. 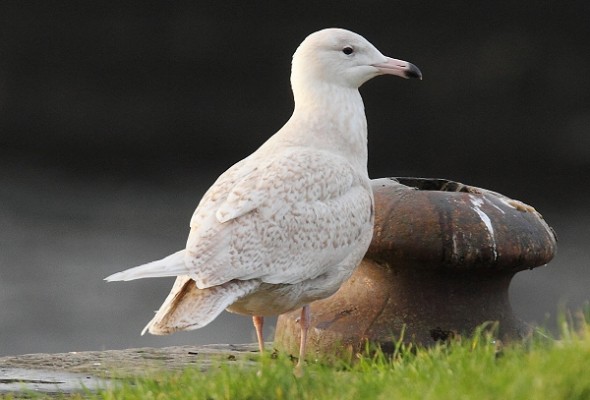 The first winter Glaucous Gull was seen at Harvey’s Quay, Limerick City this afternoon and again at Thomond Weir later in the day.
A pair of Buzzards was seen just west of Adare.

A Buzzard was seen at the Adare Golf Club.

A pair of Buzzards was seen near Adare.
Two Blackcaps(male & female) were seen in a garden at Fr. Russell Road, Gouldavoher.

A male Smew was back at Rossroe Lake, Newmarket-on-Fergus this morning (David Lyons).  Also at Rossroe was one Lesser/Great Scaup x Tufted Duck hybrid (John N Murphy), along with one Siberian (tristis) Chiffchaff, 25 Goldeneye and 45 Tufted Ducks.  There were 50 GreylG Geese at Fenloe Lough and 22 Whoopers Swans at ballycar Lough.

A Glossy Ibis was seen at Lough Atedaun this afternoon (Dave McNamara). 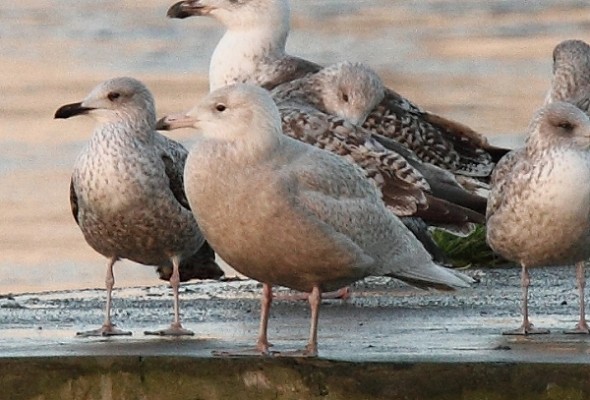 A first winter Glaucous Gull was seen at Arthur’s Quay, Limerick City this evening. This is the first record of the species in the City since January 2007. Glaucous Gull has been very much the scarcer of the two northern white-winged gull species in Limerick.
A Kingfisher was seen at the Blackbridge at Plassey.
A male Blackcap was seen at Monaleen. 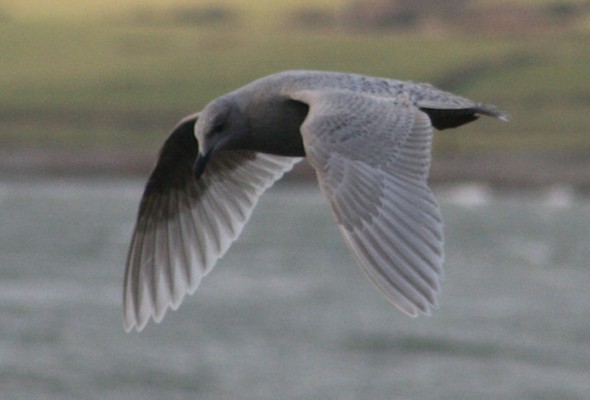 Off Hog Island today half way out between the island and the Kerry coastline at Ballylongford there were two first winter Glaucous Gulls, three first winter Little Gulls, one adult Mediterannean Gull, 25 Red-throated Divers, 15 Great Northern Divers and hundreds of Guillemots and Razorbills. A first-winter Kumlien’s Iceland Gull and three first-winter Iceland Gulls were at Lahinch, along with one Glaucous Gull, one first-winter Little Gull, several Kittiwakes, one Long tailed Duck, 40+ Common Scoter and two Red-throated Divers.

One Great Northern Diver and three Guillemots were off Glin this morning.